The Protocols. While fooling around with the new PDFdrive site, a fabulously good resource for searching and downloading arcane books, with my principal interest being cookbooks, perfectly innocently, I stumbled upon a somewhat amateurish American edition about the famed Protocols of the Elders of Zion. Which, as we have all been told, are an old forgery cooked either by the Russian Czar, in person as if he were an omnipresent Putin-like figure, another fantastic boogeyman of the same propagandist provenance, or by his (or his) henchmen.

Now the Protocols may as well be a forgery and I — as well as you — will make an attempt to find out whether it was a forgery or not. Let’s do that in good faith. Or at least let’s give it a try.

Where is the real thing?

I  admit that though a bookworm, an avid searcher and researcher of old books, I have yet to find an authentic copy of the Protocols in any language. At a point, though not doubting the veracity of the fact that they’ve been declared a forgery, I began to doubt the fact that they’d ever existed.  Maybe, after all, we are condemning an imaginary work.

So now I happen to find that this particular American volume “of hate” as one might say, of rabid anti-Semitic spite, is eerily relevant to what I am seeing is happening around us in and with the world.  And in spite of all the spite and bigotry, and despite all the “outlandish lies”, I’ve kept on reading.  I’ll later write down what I’d discovered.

But I cannot find the authentic Protocols. They’ve supposed to have been published in Russia, in Russian, in the year 1903. The first language of translation was French. I am unable to find either the Russian original, that is the authentic pre-Bolshevist copy of the mysterious work or the first French translation of the Protocols.

It seems as this may as well be yet another example of the transatlantic Fourth Reich’s unseen power grab, or rather its digital Gestapo’s ongoing attempt to control the source of facts and the facts at the source. Especially when the facts point to some pool of knowledge and that knowledge is not of the most agreeable nature. Or it may somehow be deemed displeasing to other masters. In short, that means you can find references about something being bad, but you are denied the opportunity of seeing the bad thing in the flesh, and so you can’t judge for yourself whether the baddie is quite as bad as the unseen judges tell you it is.

A Disclaimer: The Protocols. Maybe not the real thing.

Anyway, I just went through the first part of the book about the Protocols, and what I have found so far I found unnerving.

In its introductory part, the protocols, or rather the alleged protocols, are narrowed down to the global program of twenty-two points. I am going to list those “points” in a few moments, but I am shocked by the “modernity” of the whole concoction.  In fact, I have found it so bizarre that I tend to agree with those who condemn the forgery as a forgery that it may as well be a forgery.

And here is the program. But I am not an expert at the Protocols. I’ve never read them in the original edition, and these are not the Protocols, but the program extracted from them by some apparently a British or Canadian editor and interpreter of the Protocols.

The Program behind the Protocols.

1. Seduce and demoralize the youth with false doctrines.

3. Dominate humanity by preying upon their lower instincts and vices.

4. Debase and vulgarize Art, and introduce filth in Literature.

5. Destroy respect for religions; undermine the reputation of the clergy through scandalous stories and back up the so-called “Higher
Criticism” so that the old fundamental faith is shattered and quarrels and controversies become permanent in the churches.

6. Introduce the habit for luxuries, crazy fashions, and spendthrift ideas so that the ability for enjoying clean and plain pleasures is lost.

7. Divert the attention of the people by public amusements, sports, games, prize contests, etc., so that there is no time for thinking.

8. Confuse and bewilder the minds of the people by false theories and shatter the nerves and health by continuously introducing new poisons.

9. Instigate class hatred and class war among the different classes of people.

10. Dispossess the old Aristocracy, which still keeps up high traditions by excessive taxes and replace it with the “Knights of the
Golden Calf.”

11. Poison the relations between the employees and employers through strikes and lockouts so as to ruin the possibility of productive co-operation.

12. Demoralize by all means the higher classes of society and by adverse publicity raise the hate of the people toward them.

13. Use industry to ruin agriculture and then in its turn destroy industry by wild speculation.

14. Spread all possible utopian theories so as to bring the people into a labyrinth of impractical ideas.

15. Raise the rate of wages, which however will not bring any advantage to the workers for at the same time we shall produce a rise in the price of the first necessities of life.

16. Cause diplomatic friction and misunderstanding between States which will increase international suspicions and hate thereby greatly augmenting armaments.

17. Introduce in all states, general suffrage so that the destiny of nations depends upon ignorant people.

18. Overthrow all monarchies and substitute republics for them; in so far as possible fill important state offices with persons who are involved in some unlawful affair and who will, from fear of being exposed, remain our obedient servants.

19. Gradually amend all constitutions so as to prepare the soil for absolute despotism and
Bolshevism.

20. Establish huge monopolies upon which even the great fortunes of the Gentiles will depend to such an extent that they will be swallowed up at the “hour” when the industrial crisis will start.

21. Destroy all financial stability; increase economic depressions to the extent of bringing a general world bankruptcy; stop the wheels of industry; make bonds, stocks and paper money worthless; accumulate all the gold of the world in the hands of a certain few people thus withdrawing tremendous capital from circulation; at a given hour close all the exchanges, withdraw all credits and cause general panic.

22. Prepare the death struggle of the nations; wear out humanity through suffering, fear, and shortage of food – hunger creates slaves.

1. The Protocols, the Secret behind the Program. We’ll get down to its secrets in future articles. So stick around and subscribe. 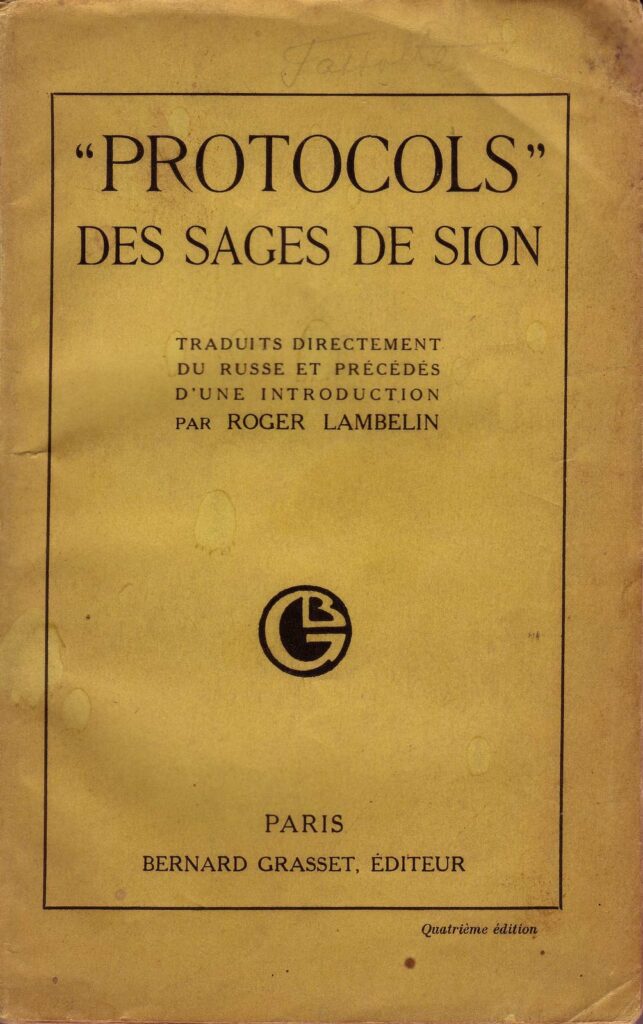 What is a protocol? And what are the Protocols?

This is pretty dense. “What is a Protocol? Literally, a ‘Protocol’ is ‘something glued on to the front’ of something else. In its usual sense it is a term of diplomacy and means the summary or precis of an official document gummed on its front page.

Hence the word has come to mean minutes or a rough draft of any document or record of proceedings. It is in this sense that the term is used in the title of the book known as The Protocols of the Learned Elders of Zion.” I just quoted the editor of that American publication and on its surface, he (and I assume that he is a he) appears quite prejudiced.

This is the problem with the damn “book” or the non-book book. People either vehemently protest its genuineness and try to convince you it is an evil deed of spite and malice or deny the deniers and claim the thing is pure and unadulterated and is in fact the truth revealing the ultimate conspiracy to enslave the world.

The Protocols. Below are some explanations but they are so cryptic that you may as well skip reading and wait for the next article. Again here the man is telling about what the document is instead of letting us make the judgment on our own.

“The latter work purports to contain minutes of certain secret meetings of the Elders of Zion at which were laid bare the aim and purpose of the General Headquarters of the Jewish nation for the conquest and enslavement of the entire world. A translation of it was first published in this country (England in 1920 by Messrs. Eyre & Spottiswoode, His Majesty’s Printers, and is now
issued from the Britons Printing Co., Ltd., by ‘The Britons.’

Its genuineness has been challenged by the Jews, but the challenge only refers to the origin of the document and has nothing to do with its bearing on the facts of recent history – which is really all that matters.” (all right, at least we now know that the editor or one of the editors is British).

The unfortunate part of the business is that the ‘forgery, and something much less committal’ – especially written history than that which is claimed to be genuine. It proclaims three incontrovertible truths, (1) that the Jewish nation is the enemy of all other nations. (2) That Jews claim that they are a people ‘Chosen’ to dominate the whole earth and take possession of all the riches of all peoples. (3) That the power of all nations is now in their hands, and that Jews think they are on the eve of their complete conquest of the rest of the human race. The date of this Protocol, No. 2 of our series, is 1860.”

Let’s stop here because it’s getting too much even for my own “seen-it-all self”.  I’ll keep on looking for the original copy of the Protocols, without becoming too fanatical about it, while you can just stick around or subscribe (the subscribe button must be on the right side of the page or somewhere below if you are using the mobile version of this site).

An Ode to the Democratic Rat.

And Will Pets Play Rugby?

Read poetry and publish your own poems at the Poetry Monster.

Write anything on the Board.

4 thoughts on “1. The Protocols, the Secret behind the Program”